Cosmoteer version 0.12.2 has been released to fix a nasty crash bug that was introduced in 0.12.1. I strongly recommend that all players update to avoid crashes.
Posted by Walt Destler at 6:04 PM No comments:

Cosmoteer version 0.12.1 has been released! This is a minor update that contains mostly balance changes and bug fixes. The biggest balance change is a dramatic reduction in how much fuel is used when making an FTL jump, but there are also some balance changes to Point Defenses and Electro-Bolts, as well as a handful of ship and crew A.I. tweaks.

The full changelog lists all of the updates included in this release.
Posted by Walt Destler at 5:59 PM No comments:

This past Wednesday I released live to the world version 0.12.0 of Cosmoteer, and oh boy was this a big release! It's got new weapons, new defenses, a new game mechanic, and some great user interface improvements.

Probably the most exciting new feature is missiles. Missiles are long-range homing weapons that do high damage in an area-of-effect wherever they hit.

Unlike the other weapons, which require line-of-sight to their target, missile launchers can be safely tucked away on the sides of ships, thanks to the missiles' own homing and obstacle detection systems.

If you take a close look at the missile launcher itself, you might notice that there are only two possible locations for doors, and they're on the sides of the launcher instead of in the rear as one might expect. The "in-fiction" justification for this is because crew have to be able to reach the missile tubes to load them and therefore the only place the control panel could go was against the back wall. But there's a also a game design reason for this: I like to make different ship modules have various different sizes and door access locations so that you, the player, have to think more about the layout of your ship. I want designing a good ship to be a lot like solving a jigsaw puzzle, trying to get all the pieces to fit right. If all modules were the same size, it would be a lot easier to design a perfect ship.

While very powerful, there is one major disadvantage of missiles: They can be shot down by the new "Point Defense Systems" that were also added in 0.12.0.

Point Defense Systems (PDS) are tiny automated gun turrets. They can't damage enemy ships, but, unlike other weapons, they can shoot down incoming missiles that come too close to them. PDS fire rapidly but are fairly inaccurate, and so it is often a good idea to cluster several PDS together to create a "wall" of gunfire which can shoot down almost all incoming missiles.

A ship without any PDS will be very susceptible to long-range missile fire from enemy ships.

The missile launcher isn't the only new weapon in 0.12.0 -- it also adds the "Electro-Bolt". This is a short-range weapon that fires bolts of electricity. While this electricity does little damage to enemy ships, any systems that get hit by an electro-bolt will be drained of some of their power. As such, electro-bolts are an effective counter against enemy energy weapons (laser blasters, ion beams, and other electro-bolts) and shields (when the electro-bolt hits the energy field it's treated as-if it hit the shield generator itself), but not effective against projectile weapons like cannons and missile launchers.

Version 0.11.4 added a feature where reactors and some other modules would cause collateral area-of-effect damage when destroyed. 0.12.0 extends this feature such that these modules also often start fires on the ship when they are destroyed. Additionally, cannons can also cause fires when their super-heated ammunition rounds are able to penetrate inside enemy ships.

Once a fire starts, it will continue burning until the module that is on fire is destroyed or the fire is put out. While crew can still walk through fiery areas, they do so much slower than normal and, worse yet, have a chance of being killed.

If a fire is not put out quickly, it is likely to spread to neighboring rooms. Fire spreads through open interior spaces and doors, but it cannot spread through walls or armor, or over exterior structure. Because fire will spread through doors but not walls, it may not be such a hot idea (pun intended) to put doors everywhere you can, because you will be helping fires spread faster.

In order for your crew to put out a fire, your ship must have a Fire Extinguisher, preferably one close by to the fire.

Because a conveyor belt only helps movement in one particular direction, it is not generally advisable to put them in 1-wide corridors, because any crew returning down the corridor will be slowed down to 1/4 speed, as well as impeding the speed of everyone else trying to go the "correct" direction. Conveyor belts are however often great for ships that are large enough for double-wide corridors, so that one side can travel in one direction and the other side can travel in the opposite. Crew are generally pretty smart about pathfinding and will almost always use the correct side of a double-wide corridor.

Because crew are pretty smart about picking the fastest path to get from point A to point B, you can also use corridors as a form of "indirect control", influencing the paths that crew will choose to take to and from their destinations.

For the past six months or so, Cosmoteer has had a little 1x1 triangular half-sized armor piece. Since it's half the size of regular armor, it doesn't have great protective value, but it's nice when, for aesthetic reasons, you want to make a ship with semi-rounded corners or diagonal edges. Version 0.12.0 adds several new shapes of armor to give even more aesthetic variety to ship shapes:

The first of these is an even-smaller quarter-sized triangular armor piece that's useful for adding details or for when you want a pointy tip on the front of an odd-width symmetrical ship.

For a long time, players have been asking for an easier way to create symmetrical ships, generally a "Mirror Mode" that would cause any changes on one side of the ship to be reflected on the other side as well. I'd been somewhat resistant to this idea, simply because the game already had a "copy & paste" feature that supported mirroring when pasting. However, watching videos of the game Navalia, which does have a mirror mode, convinced me that it was a feature worth spending a couple days to make work. And so 0.12.0 adds a mirror mode to Cosmoteer's ship designer, which works with all ship construction tools (including copy & paste!) and is available in both the floorplan designer and the exterior painter. 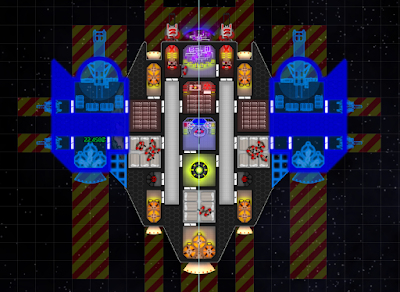 Lastly, I want to mention that Cosmoteer now has official support for "mod packages". This isn't actually a new feature of 0.12.0 (it was launched in 0.11.7), but I haven't talked about it yet.

Cosmoteer stores all of its game data inside easy-to-edit text files in its "Data" folder. These text files allow almost all game rules to be tweaked and for new ship modules and weapons to be added. However, until mods were introduced, player-created additions to the game required destructively editing the files in the Data folder. This made it hard to install (and uninstall) mods, and any game updates would erase any changes made by mods.

The "mod packages" introduced in 0.11.7 solved both of these problems. Mod packages are self-contained folders that contain special code to "edit" the base text files in-memory after the game is loaded without actually modifying the files on-disc. Since each mod has its own folder, and the text files in the base game aren't ever actually modified, it's very easy to install and uninstall mods.

Cosmoteer even has its own "Mods Manager" for installing and uninstalling mods and turning them on and off: 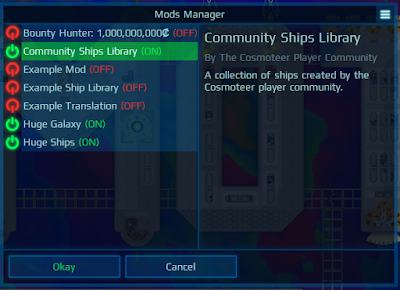