Cosmoteer 0.13.1 has just been released! The majority of changes are bug fixes, but there are still a couple of nice other improvements:

First, this update adds to multiplayer a feature called the "Perimeter of Death". This is a giant circle around the battle area that will quickly damage and destroy any ships that stray outside of it. It is intended to reduce the effectiveness of "kiters" (ships with long-range weapons and lots of thrust that simply stay out of range of enemies) as well as prevent players from simply running away indefinitely. 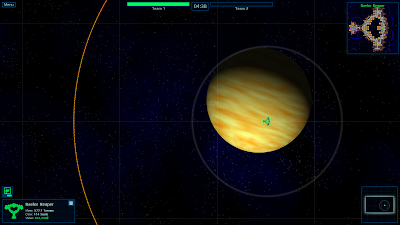 The other feature is something that a lot of players have been asking for: a "sort" function for the Ship Library. Now, players can sort their ships by name (the default), cost, crew, or date modified. 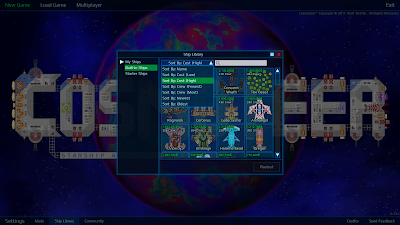 Posted by Walt Destler at 2:19 PM No comments:

Given the lack of updates for the past couple of months, you'd be forgiven for thinking that I had stopped working on Cosmoteer. Thankfully, you could not be more mistaken!

I've actually been working on one of the biggest new features in the history of Cosmoteer: Multiplayer!

Those of you who have been following Cosmoteer for a really long time probably know that the original prototype versions had support for multiplayer in which players could design ships and battle them with their friends. But I realized that having to support multiplayer was dramatically slowing down the development of Cosmoteer, including development of singleplayer-only features. And so I removed multiplayer support from the game's code, hoping (but not expecting) that one day I would be able to bring it back.

Well, that day has arrived! I am incredibly proud and excited to announce that multiplayer is returning to Cosmoteer!

In this first version, multiplayer is a simple team-versus-team battle of up to 8 players spread across two teams. Each team has a certain amount of money (configured by the host) to spend on a fleet of up to 5 ships per player (or fewer, as configured by the host). Then the game starts and the players control their own ships, attempting to destroy the other team's fleet. The game ends and one team is declared the winner when either the other team's fleet is sufficiently destroyed or the timer runs out. 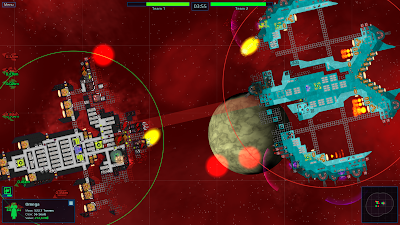 You can play with anyone on the same LAN (Local Area Network) as you, and you can also play with a friend anywhere else in the world by typing in the host computer's I.P. address. (There is not yet a public online list of games, but I hope to add that soon.) 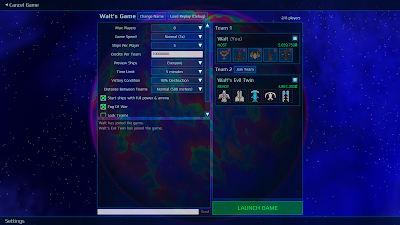 This is just the beginning! This first version lays the coding foundation for more improvements to come. In the long term, I may add entirely different game modes, such as multiplayer co-op and creative modes. In the near future, I plan to add:

There's lots more details and plenty of other fixes and improvements in the full changelog.

Thankfully, the answer to that is mostly "no", and the reason for that is that I've taken an entirely different approach to implementing the multiplayer code.

The original implementation of the multiplayer code required that every single change in the state of the game (such as a ship firing a weapon, a ship moving a millimeter, a crew person walking a foot, or a bullet hitting an enemy) be synchronized among all players by sending packets over the internet. This was a huge problem for two very important reasons:
The new multiplayer code uses an entirely different approach that's called "deterministic lockstep". Essentially, this approach requires that two computers running the same version of the game with the same initial battle setup and same player inputs will simulate the game in exactly the same way. (Not even off by a millimeter, or else the butterfly effect will cause bigger and bigger errors until the game desyncs.) There are two big advantages to using deterministic lockstep:
There are, however, some important disadvantages to using deterministic lockstep:
While these downsides are significant, none of them are deal-breaking, and are certainly preferable than the problems caused by the original way I implemented the multiplayer code.

All in all, getting multiplayer working again was a pretty huge undertaking -- one that I wasn't even sure I could pull off -- but in the end I think it has proven to be well worth it. And I'm looking forward to playing a ton of Cosmoteer multiplayer as a result!
Posted by Walt Destler at 7:40 PM 4 comments: