My biggest accomplishment this week has been to add crew and an "ammunition" mechanic to weapons for my Starship Builder game prototype.
Your ship now needs crew for most systems, such as weapons and thrusters, to be able to operate. Crew can now be added by placing "Crew's Quarters" rooms into your ship. Each Crew's Quarters comes with a set number of crew, who will automatically find systems to operate.
Additionally, your ship's cannons can now only store a limited amount (5) of ammunition. If a cannon runs out of ammunition, then a crewmember must hand-carry a "ammo ball" from a nearby "Ammo Supply" (another new kind of room) to the cannon. (Yes, this is way in the future, but for some reason there are no systems to automate this.) This way you have to think about placing Ammo Supplies near enough to cannons so that they don't run out of ammo in the middle of a fight. 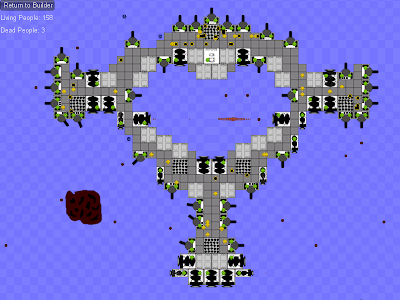 While crew can travel through any part of the ship, they travel much faster through corridors than through any other parts. If you want your ship to operate efficiently, then you'll have to think a lot about planning your corridors to give your crew quick access to the ship's systems.
Changes from the previous version:
You can download this latest build for PC and Mac.
Posted by Walt Destler at 12:53 PM No comments:

This past week I added cannons and asteroids to my "Starship Builder" game prototype. Cannons are a new piece that can be added to ship designs, and asteroids are targets for the cannons to shoot at.

A ship brimming with cannons: 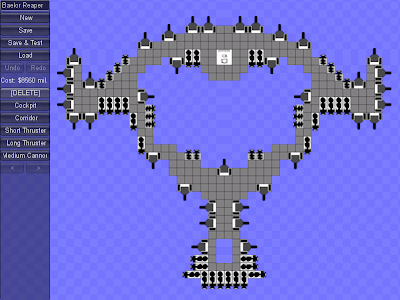 And the same ship blowing up some asteroids: 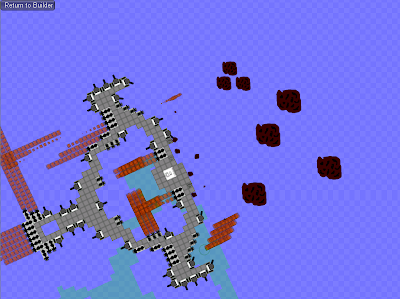 You can download PC and Mac builds of this new version and try it out for yourself!

Here are all the big changes from the previous version that I can think of:

Posted by Walt Destler at 12:22 PM No comments:

In a previous post I talked about an idea I have for a new game. In this game players are able to design their own space ships by placing rooms, weapons, engines, corridors, and other systems onto a grid. Everything in the game is very flexible (you can make ships of any shape, size, and configuration) and dynamic (realistic physics, weapon damage is inflicted to specific components on the grid). You can read a more detailed description in that post.

I've started to implement a very rough prototype of an interface "builder" that allows you, the player, to design your own ship and then test it in a separate "simulator" mode. 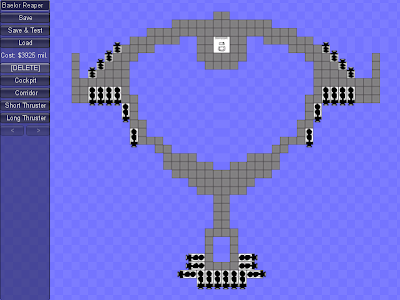 And here's the "simulator" showing the ship from above flying through space: 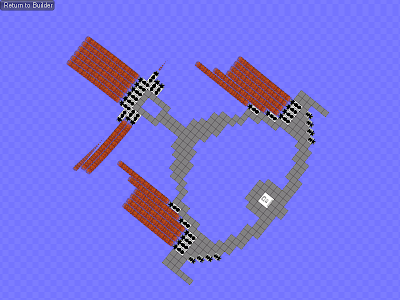 If you want to try it out yourself, here are links to PC and Mac builds.

Posted by Walt Destler at 12:10 PM No comments: