This is the fourth and final of the posts introducing each of the four main non-player factions in Cosmoteer. You can read the first post about the Monolith Cooperative here, the second post about the Cabal of Sol here, and the third about the Centauri Imperium here.

The Fringe Systems Resistance is a loose conglomeration of independent star systems united only by the common desire to survive and remain independent.
The "Fringe" star systems are those that lie on the edge of the known galaxy or between the territories of the major factions. They are generally sparsely populated and have a low standard of living. While there is a strong code of honor among inhabitants of the Fringe, there is no common government or system of laws beyond the borders that can be enforced by each individual settlement or station. As such, the Fringe systems tend to attract a "rough and ready" type of personality, and piracy runs rampant.

There are no formal cooperation agreements between any of the Fringe systems, so the extent to which they can be called "unified" is based on a mutual hatred of the other major factions and an understanding that they can better defend their independence working (begrudgingly) together than apart. Despite this cooperation, the Fringe systems are no match for the full might of any of the major factions, and thus are fighting a doomed battle, losing their independence one-by-one. 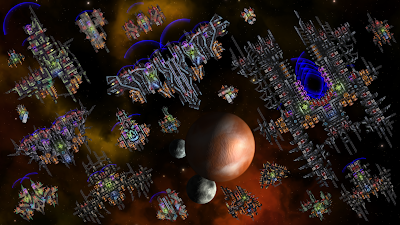 The ships of the Fringe are typically ships from the other factions that have been salvaged, repaired, and repurposed, pieced together from multiple such ships, or constructed and expanded over time on an ad-hoc, as-needed basis. As such, Fringe ships are generally considered to be poorly "designed" (if that word can even be applied), with little rhyme or reason, often appearing misshapen or even "organic". Their paint is typically left over from however the original ships were painted, albeit more scuffed and faded, and often with additional markings (clan symbols, kill counters, etc...) applied. To the extent to which there is any commonality in their design, it is out of shared circumstance and not coordination.

Fringe ships have no preference for type of weaponry or defenses but are greatly limited by the resources at hand; they will happily use whatever they can get their hands on. Thus, Fringe ships tend to be outfitted with an eclectic assortment of lower-tier equipment such as lasers, cannons, disruptors (electro-bolters), point defenses, small shields, and armor. More advanced weapons and defenses are much less common but can still be occasionally spotted.
Don't forget to add Cosmoteer to your Steam wishlist so that you get notified when it launches!
Posted by Walt Destler at 3:44 PM No comments: