This is the first in what will be a four-part series of posts introducing each of the four main non-player factions in Cosmoteer.

The Monolith Cooperative is a massive mining, manufacturing, and transport company that dominates galactic trade and economics with near-monopolistic power.
Originally branded as the "Armstrong Mining Cooperative" in the pre-hyperdrive era, the company had the remarkable good fortune of being the first to discover what is now known as the "Armstrong Monolith" hidden deep within the Sol (Earth) system's asteroid belt. The Armstrong Monolith was the last remnant of an ancient civilization that made its home on the planet which, before its destruction, orbited between Mars and Jupiter. The monolith itself was a technological archive that, once decoded, was discovered to contain blueprints for hyperdrive technology and the ability to detect and use the vast network of hyperjump relays built by the civilization long ago. Although there is some debate, it is commonly assumed that the destruction of their planet was caused by a misuse of hyperjump technology similar in hubris to that which led humanity to destroy the whole Sol system. No biological remains of this civilization, nor any evidence of their physical form, have ever been found, leading to much speculation about whether they were truly alien or a precursor to humanity.

After the discovery of the Armstrong Monolith, it took only two years for the Armstrong Mining Cooperative to recreate rudimentary hyperdrive technology, and then only another five to make it robust enough for commercial use. Although at first the company successfully guarded the technology as the most important trade secret of all time, the fundamentals of hyperdrive technology eventually leaked a couple years later and quickly spread throughout the solar system. Even still, those couple years gave the company (now known as the Monolith Cooperative) enough of a head start to dominate its competitors and eventually become the largest industrial powerhouse in the history of humankind.

Although not overtly imperial in ambition, Monolith has gradually built one of the galaxy's largest military forces over the two-hundred years since the discovery of the Armstrong Monolith. At first this was out of necessity to defend its own transport routes and mining and manufacturing hubs, but as the might of its military hammer grew, well, as the saying goes, all its problems started looking like nails. Middle managers tasked with convincing reluctant colonies to pay exorbitant prices for life-sustaining necessities would often use their ostensibly "defensive" fleets to blockade competitors and coerce the colonies into signing unfair trade contracts. As the space-high prices of basic goods bankrupted the local governments, Monolith was only happy to step in and sell its own administrative and police services at a discount—in exchange for a hefty percentage tax on the colony's gross income, of course. Although claiming no actual territory, the Monolith Cooperative is now the de facto government of almost a quarter of the known galaxy.

The "Cooperative" part of its name comes from the fact that the Monolith Cooperative is and always has been fully employee-owned. No single person owns more than 0.1% of the company, and no shares of Monolith have ever been sold either publicly or privately. Instead, every full employee of Monolith (not including contractors) owns a very small percentage of the company (the exact amount depending on rank and length of employment) and as such is entitled to a proportional share of the company's profits in addition to their base salary. Since the company is ultimately subservient to its own employees, those who are lucky enough to be counted among them, from the middlest manager to the lowliest janitor, enjoy good pay, fair treatment, and a general quality of life far in excess of the galactic average, making the typical employee extremely loyal to the company. But due to their desire not to dilute their own shares, the employees of Monolith have mandated hiring standards so strict that only about 5% of the population under Monolith's governance are actual employees, many of whom only become so out of nepotism. Much of the remaining population lives in extreme poverty, and Monolith-governed colonies have by far the highest wealth inequality of anywhere in the galaxy. 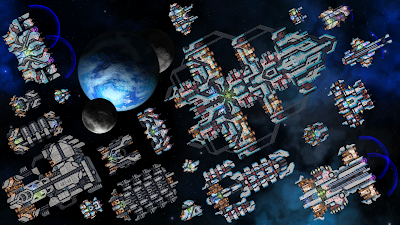 Monolith ships are generally very utilitarian in design. Military and transport ships are generally boxy with 90- and 45-degree angles. Mining and construction ships sometimes have more interesting shapes, but always because they are engineered to solve a specific problem, not for any artistic or expressive reason. The paint and finish of mining and construction ships tends to be grays and browns, often with a lot of wear and tear. Transport ships on the other hand, because they are seen more frequently by the general public, tend to be painted shades of gray and white with generally better exterior upkeep. Military vessels, intended to project a sense of wealth, competence, and authority, are usually a spotless white and blue.
Unsurprisingly given its status as an industrial powerhouse, Monolith military ships usually favor weapons and defenses that use a lot of materials. This primarily means cannons, railguns, high-explosive missiles, mines, flak, point defenses, and armor. Due to their expertise in mining, Monolith ships also often have ion beams (though almost never with prisms) and mining beam lasers. Due to their frequent need to fight more energy-focused ships from other factions, larger Monolith ships are also frequently armed with EMP missiles. Other low-tech, energy-based systems such as lasers and shields are less common but not unheard of. When used, shields tend to be of the "large" variant, and Monolith ship designers are full of hubris and thus usually poor at protecting them, rarely ever layering them behind small shields and only occasionally protecting them with strategically-placed armor. Monolith military ships always come with ample storage for their munitions, and larger ships usually have the capability to rapidly manufacture more.

Monolith ships of all varieties also tend to be larger than similar-class ships of other factions, favoring size and storage capacity over speed, often relying on their strong hyperdrive capabilities to escape situations where they would otherwise be too slow. Boost thrusters are rarely used. Tractor Beams, originally developed for hauling asteroids, have always been common on Monolith mining vessels and have more recently become common on larger military ships as well.
Don't forget to add Cosmoteer to your Steam wishlist so that you get notified when it launches!
Posted by Walt Destler at 2:29 PM