At long last, after months of work, I'm very happy to finally announce that Cosmoteer's 0.14.5 update, by far the largest ever, is now done and available for download! 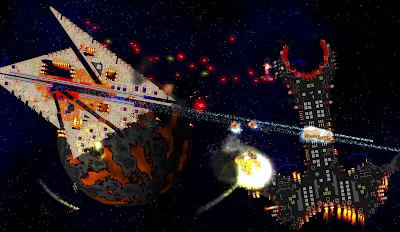 Tactical Nuclear Torpedoes are a new type of super-missile that cause massive damage in a large area. Unlike the conventional High Explosive Missiles, Nukes are slow, short-range, and unguided, but if you can get in close and hit them with a salvo, you can lay waste to your enemies.

Nukes are launched from the same launcher as the conventional missiles, and you can change what type of munition the launcher fires at any time, even during battle. So one tactic might be to pummel your enemy from afar with the High Explosive missiles to weaken their defenses, switch to nukes, and then swoop in close to let off a devastating nuclear salvo.

Nuclear Missile parts are manufactured by a new factory, the new Nuclear Torpedo Factory. This is a large and very expensive module that produces Nuke parts very slowly, so you'll need to be choosy about when to fire off your Nukes.

Electromagnetic Pulse Missiles, or "E.M.P.s" for short, are a new support weapon that, like Electro-Bolters, drains power from enemy systems, but does so from afar and with a large area of effect in which power gets drained. They are even faster and longer-ranged than the conventional High Explosive missiles, making them ideal for taking out the enemy's shields or disabling their engines from afar.

E.M.P.s do have an Achilles' Heel though, which is that armor will act as a "lightning rod", attracting some of the power-draining electrical bolts.

Like Nukes, E.M.P.s are fired from the regular missile launcher, which can be switched to fire E.M.P.s at any time. They are manufactured in their own factory, the E.M.P. Missile Factory.

Proximity Mines are a tactical armament that can be used to punish enemy ships for intruding into your space, for slowing down enemies in pursuit, or even, in niche situations, as a direct offensive weapon. Once a mine is launched and deployed, they will wait silently until an enemy ship ventures too close and then detonate, shooting out deadly piercing shrapnel in all directions.

The main drawback of Mines is that they need to deploy before becoming a threat, and they can only be deployed once they slow down to a sufficiently low speed, making them difficult to use as an offensive weapon on fast-moving ships.

Like Nukes and E.M.P.s, Mines are actually also fired from the regular missile launcher, meaning that you can freely switch between High Explosive Missiles, E.M.P.s, Nukes, and Mines at any time, even during battle.

They are manufactured by the Mine Factory, which uses both power and cannon ammunition to produce the mines. Unlike the other missiles, a single crewmember can carry an entire mine, making them fast to load into the launcher and fire, but they're slow to produce, so you may want to stock up on mines for when you need a lot of them.

The new Flak Battery is a large quad-barreled weapon that can fire at both enemy ships and enemy missiles, mines, projectiles, and lasers. It's a good all-around defensive system and a decent anti-ship weapon, but it's limited by its short range and very narrow arc of fire.

Like the Cannons and Railguns, the Flak Battery uses standard cannon ammunition manufactured by the Cannon Ammo Factory.

Nukes, E.M.P.s, Mines, and Flak are just the beginning of this update! The changelog is by far the longest ever and includes new features like revised area explosion mechanics, user interface improvements like shield health bars, balance changes, crew A.I. enhancements, performance optimizations, bug fixes, and a ton of new modding tools to make your favorite mods even more awesome.