Cosmoteer update 0.15.2 is now available for direct download and auto-update via Steam! This update allows you to assign reactors, factories, and storages to supply other parts on your ship, prioritizing supplying ammo or power to those parts and preventing them from supplying any other parts. It also improves the camera by adding auto-tracking of on-screen ships, plus a handful of other improvements and fixes.

The previous update, 0.15.1, added the ability to assign squads of crew to exclusively prioritize specific weapons and other ship systems. Now, the 0.15.2 update brings a similar feature to reactors, factories, and storages:

If you open Crew mode and click on the "behavior" tab, you will now be able to select a supplier (reactor, factory, or storage) by left-clicking on it and then right-click on another weapon or ship system you want that you want to supply. The targeted weapon or system will then prefer to get its power or ammo from that supplier whenever possible, and the reactor, factory, or storage itself will then never supply anything else which it isn't targeting. 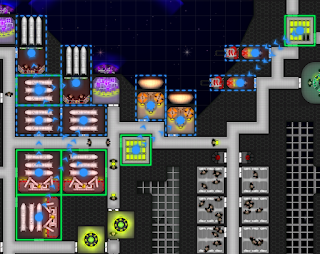 You can use this feature to further optimize your ships. For example, if you want to make sure your crew will never go to a farther reactor to pick up power for a laser blaster, then you can simply assign the closest reactor to that laser blaster and then any crew picking up power for it will only ever pick up power from the assigned reactor. You can even use this to create "storage chains", such as assigning a factory to a storage, that storage to another storage, and so forth, reducing the distance that any single crew has to walk across your ship.

One of the big things I learned playtesting Cosmoteer at PAX West was that new players often struggle to control the game's camera, especially during combat as the ships are almost always moving. Yes, the game for a long time has had various features for locking the camera on ships, but it takes a while to learn how to use those features, and until you do, trying to keep the ships on screen can be pretty frustrating.

So in order to make the game less frustrating for new players, this update also adds a simple "auto tracking" feature to the player's camera. Basically, unless you have specifically locked the camera on a ship or the eye icon, the camera will now automatically match the velocity of and move with any ship on the screen, keeping it in the same relative location. If there are multiple ships on screen, it will simply match the average velocity of all of the ships. This feature should greatly reduce the need to use the other camera-locking features (which of course are still available), but if you don't like it, you can simply turn it off in the camera settings.

This update also has a handful of other fixes and improvements, which you can read about in the changelog.
Posted by Walt Destler at 6:30 PM No comments:

Last weekend I attended PAX West in Seattle to showcase Cosmoteer as part of Indie Megabooth. PAX was a ton of fun, and working with Indie Megabooth made the experience so much easier than if I had to do everything myself, so I am greatly appreciative of all the effort they put in to making PAX a success for Cosmoteer! I estimate that about a hundred people got to play the game on the expo floor, and the reception seemed overwhelmingly positive, making me more optimistic than ever about Cosmoteer's future success!

Here are a couple photos of my booth at PAX: 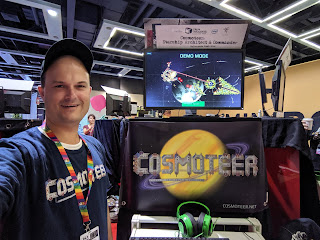 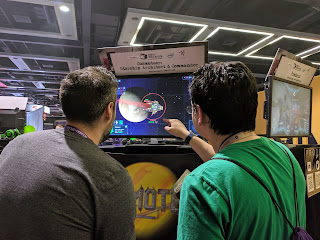 If you're interested, I also gave a couple interviews about Cosmoteer. I didn't announce anything new that active followers of Cosmoteer don't already know about, but if you've ever wondered how I sound and look, here you go:

In other news, Cosmoteer update 0.15.1 is now available for direct download and auto-update via Steam! (This news actually comes about a week late since the update was released last weekend while I was still at PAX, and I didn't have time to write up a new post, but better late than never!)

Like most updates, 0.15.1 has a variety of improvements and fixes, but the major new feature is the ability to "assign" crew squads to do jobs for specific weapons and other ship parts. To do this, select the squad's bedroom and then right-click on the weapon or part you want to assign them to. While assigned, crew will prioritize doing jobs for the assigned part and will not do jobs for any other parts. This will override any custom 1-10 priorities that have been set. (To assign a squad to multiple parts, hold Shift while right-clicking. Role priorities will still be used to choose between multiple assigned parts.) 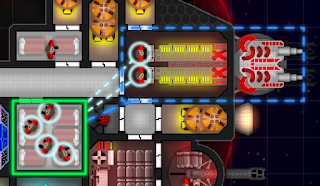 You can use this feature to optimize your crew's efficiency and to prevent them from wandering off to other parts of your ship without having to resort to compartmentalization.

Read about all the other improvements and fixes in this update in the changelog.
Posted by Walt Destler at 2:51 PM No comments: