Cosmoteer 0.12.12 is out! And while it's not as huge as 0.12.11 or 0.12.10, it's still got some nice stuff in it. Specifically, thanks to some great work by the community crunching some numbers, I have done a pass over all of the weapons to adjust their damage, rate of fire, and ammo usage, to make them more balanced. (Standard Cannons are no longer the clear best weapon as measured by DPS.) There's also a bunch of other improvements and bug fixes, which you can read about in the changelog.
Posted by Walt Destler at 7:34 PM No comments:

The biggest and most obvious improvement can be seen when starting a new game: 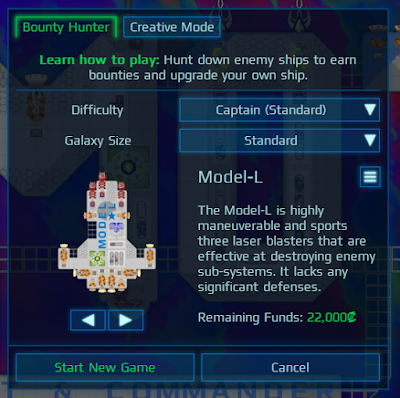 When starting a new Bounty Hunter game, you are now given several options to customize your play experience...

Second, you can also customize the size of the galaxy, which simply determines how many solar systems will be in it. "Standard" is the closest to the single size that was available until now, but you can play with a huge galaxy if you want a really long game or a small galaxy if you want a shorter experience.

Another big change to Bounty Hunter is the presence of enemy "fleets". Now, in some cases when a single enemy would have spawned in older versions, in 0.12.11 that single enemy will be replaced with 2 or more smaller enemies that will work together as a single fleet. This means that you'll have to design your own ship(s) to be able to combat multiple enemies at once. The chance of enemy fleets spawning depends on the difficulty level selected.

This update also has a ton of big balance changes that I hope will make ship design more strategic. These include a nerf to Point Defenses (to make them less effective versus swarms of missiles), an area-of-effect buff to missiles themselves (to make them a possible counter against parts placed directly in front of shield generators), cannons now have a random "spread" (to make them less effective at sniping specific enemy parts), and Electro-Bolts can now penetrate through shields (meaning they can drain from multiple overlapping shields).

Lastly, players complained a lot about how moving parts of ships to different locations cost money to move, and so I made a change that allows you to move a part from one location to another without losing any money. Basically, if you pick up or remove a part, you'll only get a 75% refund, but then if you place the same kind of part somewhere else, you'll only pay 75% of the base cost. Once your ship fights a battle or makes an FTL jump, you'll lose the 25% discount for any parts you've removed but not re-added and you'll have to pay the full 100% price.

There are a whole ton of other improvements and bug fixes in this update, which you can read about in the changelog.
Posted by Walt Destler at 7:12 PM No comments: