Faction Introduction: The Cabal of Sol

This is the second of a four-part series of posts introducing each of the four main non-player factions in Cosmoteer. You can read the first post about the Monolith Cooperative here.

The Cabal of Sol is a religious and scientific organization that worshipped Sol (Earth's star) until its destruction fifty years ago and now endeavors to "reincarnate" its dead God through scientific research.

Although it is not known precisely when the Cabal was founded, it has existed in some form for at least several hundred years. Originally a secretive cult, it is now a massive, mainstream religion and powerful galactic nation-state. Its adherents believe that each star is, in effect, a God; creator of planets and moons and giver of the energies that sustain life. Although they believe that every star is a God, the Cabal of Sol specifically worships Earth's star Sol as the creator of not just Humanity but also the ancient civilization that created the hyperjump gates and left behind the Armstrong Monolith.

The Cabal of Sol is a highly-organized religion that claims more than a fifth of the known galaxy as its own territory, making it one of the largest galactic nation-states. Within Cabal territory, religion and government are inseparable. A hereditary council of twelve High Priests of Sol make the laws, and a complex hierarchy of priests and other clerics administer the functions of government with unusual strictness and harshness. But for those willing to live under the edicts of the Council, life can be good thanks to the extensive social services and a universal basic income provided by the Cabal. And many people from across the galaxy do indeed choose to brave the trip to Cabal space to take advantage, thanks to the Cabal's open immigration policy that welcomes all—as long as they profess a belief in Sol and renounce all other religions.

Although unproven, rumors persist that Cabal scientists were directly involved in the accidental destruction of Sol and its star system. According to the rumors, Cabal scientists were working to develop hyperjump and shield technologies so advanced that a ship could jump directly into the core of a star, where its most elusive secrets would be revealed. But when this was attempted with Sol, according to the rumors, the result was not the hoped-for scientific and religious revelation, but the destruction of the entire Sol system, costing billions of lives and setting back human advancement by thousands of years. Any involvement in the destruction of Sol is, of course, denied by Cabal officials, but conspiracy theorists claim that their involvement could be proven if only the Cabal would open its vault of secret documents to the public—something which the Cabal has thus far refused to do.

Regardless of whether they were involved or not, their current motivation is very clear: The Cabal seeks to reignite Sol's dead core and reincarnate their dead God. Nearly all of the Cabal's formidable scientific might for the past fifty years has become singularly focused on this goal. 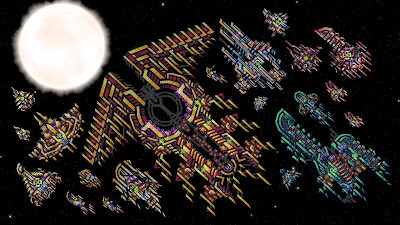 Cabal ships, both military and civilian, are considered to be among the most beautifully-designed in the Galaxy, and Cabal ship architects, known as Sculptors, think of themselves as master artists. For the Cabal, every ship is a tribute to the grandeur of Sol, with form being at least as important as function. Cabal ships are often irregular and asymmetrical, playing creatively with curves, rays, and other interesting shapes. They are usually painted brightly with yellows and oranges, and sometimes greens, purples, and blues as well.

As masters of energy manipulation, Cabal ships generally favor energy-based weapons and defenses. On offense this includes lasers, disruptors (electro-bolters), ion beams + prisms, and railguns. For defense, the Cabal primarily relies on speed and shields, rarely spending much mass on armor. Cannons and flak are almost unheard of on Cabal ships. Despite their prowess at harnessing energy, Cabal ships typically have less efficient hyperdrives, and tractor beams are not particularly common.
Don't forget to add Cosmoteer to your Steam wishlist so that you get notified when it launches!
Posted by Walt Destler at 11:08 AM