Before I talk about the latest new features of Starship Builder, I want to mention that I decided to dump the new art style that I tried in my previous post. While much cleaner and more "slick"-looking than my original uber-crappy programmer art, the new style just didn't *feel* right for a game based on a detailed starship simulation. Also, it reminded me too much of the art style of Captain Forever.

In recent versions, it was possible to directly control the crew of your ship, explicitly assigning them to various stations. This proved to be too hard to manage, especially as ships were constantly moving about and rotating -- it was too hard to select the desired crew and tell them where to go.

So in this latest version, you no longer have any control over the crew on your ship, who are now completely automated. The crew will now by themselves seek out jobs to perform -- you don't have to worry about that. Different jobs have different priorities so that, for example, the person manning the Cockpit will never leave his job to man a cannon. Eventually you may have a way to adjust the priority of what jobs the crew is performing -- say, manning weapons versus repairing systems -- but this feature is not implemented yet.

However, you do have control over which systems are activated and which are not. By default all systems are active, but if you select one or more systems and press the C key, then any crew manning those systems will automatically leave and find other jobs to perform. Press the C key again to re-active the selected systems. 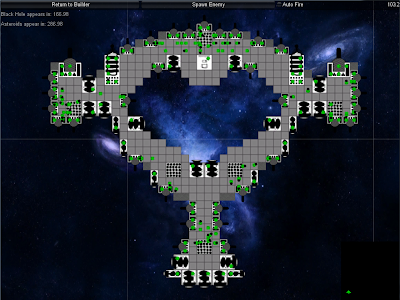