Combat is of course a major part of StarWright, and I've just finished the major ship-versus-ship combat systems. The mechanics of combat work essentially the same as in the original prototype. Weapon turrets automatically track and fire upon nearby enemy ships. Damaged is handled on a part-by-part or room-by-room basis, where individual parts or rooms can be individually destroyed. Additionally, if the only parts joining two sections of the ship are destroyed, then the ship will be split in two and become effectively two distinct ships.

As in the original prototype, cannons are able to penetrate deeply inside enemy ships, damaging critical systems deep within the ship. The current defense against cannons is to add parts with a high "penetration resistance" such as armor tiles or cannons themselves. While there currently aren't many systems inside ships worth protecting, I plan in the future to have many such systems, such as ammo supplies, power generators, shield generators, engineering bays, etc... 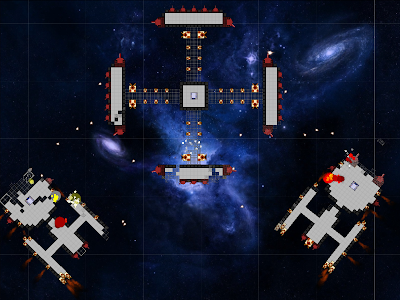