StarWright - Multiplayer! (and saved games too!)

WOW, it has been a very long time since I last posted about StarWright! To a great extent my new job has been keeping me quite busy, but also I've been working on the biggest new feature yet... 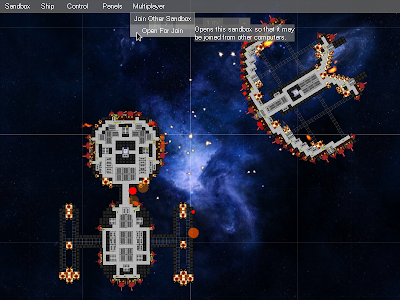 Adding multiplayer play to StarWright has been a huge task, as anyone who has ever added multiplayer networking to a previously-singleplayer game can tell you. Every core mechanic of the game, from damage and destruction to crew pathfinding to command and control, had to be overhauled to be multiplayer-capable. Add to this the creation of a custom UDP communications protocol and a programming library for "remote procedure call", both of which are critical to the multiplayer capabilities of StarWright.

To make matters even more difficult, my belief is that ever single mode of play in StarWright should be multiplayer-capable. That even includes the sandbox mode, which is the only real way to play the game right now. Making the sandbox multiplayer-capable as well meant that all the systems related to designing ships, such as adding and removing ships, adding and removing parts, and undo/redo, had to work over the network as well.

On the bright side, sending the state of the game to another player essentially amounts to creating a save file of the game and sending it to the other player. So even though drop-in-anytime was a big feature to implement, I basically got a save-game feature almost for free. The code that handles networked state sending is about 95% shared with the code that handles game saving, even though networked state sending and game saving write the data to different formats (networked state sending uses a compact binary format to reduce bandwidth usage, while game saving uses a custom text format which is more tolerant of game version changes). This is thanks to a robust multi-format serialization library that I developed for my game engine, Halfling.
Posted by Walt Destler at 4:29 PM