Cosmoteer 0.12.7 has been released with a variety of unrelated improvements.

The most important change that everyone should know about is that the location in which saved games and ships are stored has been moved from Saved Games\Cosmoteer (the old location) to Documents\My Games\Cosmoteer (the new location). I made this change because some players for some reason didn't have a Saved Games folder on their computer and thus were unable to play the game. When you run Cosmoteer for the first time after updating to 0.12.7, the game will attempt to automatically move all of your existing saved games and ships to the new location, but if that fails for some reason then you'll have to move them manually.

0.12.7 also has a few balance changes, most notably being a "fix" to a deliberate flaw in the ship A.I. that prevented it from properly staying at the desired distance from the enemy. This has the effect of making "kiter" ships (ships with long-range weapons like missiles and a lot of reverse thrust) much more viable. I'm not sure that's actually a good thing for the game's current balance, but the proper counter to kiters certainly should not be a gimped A.I. (I'm considering adding tractor beams as a way of countering fast ships.)

Lastly, I have paid off the "internet mafia" (my word, not theirs) to get what's called a "digital signing certificate" that I can use to "prove" to Windows that I, a real person named Walter Destler, am the author of Cosmoteer. So now, when you run the installer, you'll get a dialog prompt that looks something like this: 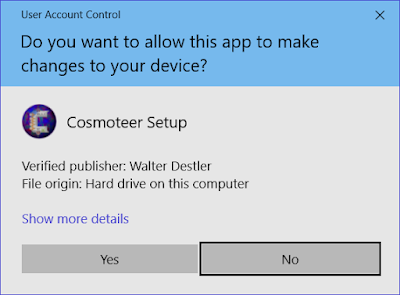 The real reason for doing this is that, in theory, anti-virus programs are more trusting of applications that have digital signatures. I'm hoping this will reduce the number of problems that overly-aggressive anti-virus programs cause with Cosmoteer. Only time will tell!
Posted by Walt Destler at 6:33 PM