Cosmoteer update 0.14.14 is now available for direct download and, for the first time ever, can also be downloaded on Steam, still for free! This is a small update that adds an optional "Aim Assist" to Direct Control Mode and fixes a handful of bugs.

The recent 0.14.12 update added the much-requested "Direct Control Mode" that allows players to manually fly ships with the keyboard and aim & fire weapons using the mouse. While the ability to fly your ship with the keyboard was well-received, many players found aiming weapons using the mouse to be too difficult, putting them at a big disadvantage.

This latest update seeks to address that problem by adding an "Aim Assist" feature. Basically, your weapons will automatically try to figure out what you're aiming at and target that thing while taking into consideration projectile speed and the target's velocity, just like they already do when you're not using Direct Control Mode.

In this GIF, we can see how the laser blasters are automatically targeting the parts of the enemy ship closest to the mouse cursor instead of firing directly at the cursor's location:

Also note the new faint-red dotted circle around the enemy ship. This indicates the ship that your weapons will aim at and is typically the ship closest to your mouse cursor. (Friendly ships will have a gray dotted circle, indicating that they are friendly and cannot be hurt.) You can also press the Alt key to lock-on to a ship, making your weapons always target that ship even if another ship is closer. Locking-on to a friendly ship will also turn on "friendly fire" against it, allowing your weapons to target and damage the friendly ship.

Aim Assist is an optional feature that is turned on by default but can be turned off in the gameplay settings.

By popular demand, Cosmoteer can now be downloaded and updated using Steam, the most popular digital distribution platform for PC games! To download Cosmoteer on Steam, head over to Cosmoteer's Steam page and click the "Download Demo" button on the right hand side: 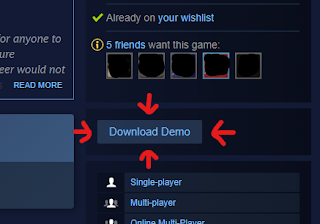 (Even though it's called a "Demo", it's really the full version of Cosmoteer and is not limited in any way. Making it a demo was simply the best option for allowing the game to be downloaded on Steam without giving away the paid version for free. Please note that the demo will likely be removed before Cosmoteer launches as a paid game.)

If you don't want to download Cosmoteer using Steam, that's fine, you can still download the "standalone" version like normal. But there are a couple big advantages to downloading Cosmoteer on Steam:

First, Steam will automatically keep Cosmoteer updated, and Steam's smart patching software will only download the portions of the game that have changed instead of having to download the whole game with every update, saving you time and bandwidth.

Cosmoteer will display how much space you're using when saving or loading a saved game or ship:

This update also has a handful of other fixes and improvements, which you can read about in the changelog.
Posted by Walt Destler at 3:36 PM